To Bee Or Not To Bee That Is The Question? 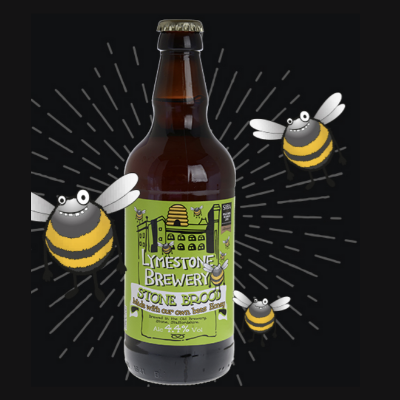 At high school I found The Observer Book of Bees on a shelf somewhere and told my parents we should get some. They diligently explained why that was not going to happen in their suburban semidetached house with average garden. Fair enough. Life is a marathon (if you’re lucky). 40 years or so later, I have a brewery. Bees are on the decline. I’d like to do my bit.

A guy I knew kept bees so he (Lee the bee) became my bee guru. Lee was brim full of bee keeping knowledge. He had bee facts and bee experience however, he worked irregular shift patterns in London. Consequently his interjections were more when he was available rather than when I desperately needed his help. He got me started and provided lots of assistance, equipment and encouragement and for that I’m truly grateful.

We started with two empty hives on the roof of the brewery - well actually on next doors roof which was easier to reach and had more protection from the weather. Queens and colonies were purchased and collected and a swarm adopted us. Our two colonies became three. Over the years the number of our hives - and the bees within - have fluctuated. There have been good years and bad but despite strong winds and bitterly cold winters, we’ve always managed to keep a colony or two of bees. Just over two years ago our neighbours announced they had negotiated a new lease - and with it a new roof! Our bees had to move to allow the work to commence.

There is a science to moving an active beehive. It pays to follow the science. What follows illustrates how not to move a beehive. I moved the hives one at a time. On separate days. Smallest one first. It didn't go well. The night before - well into the evening - I sealed the hive as best I could. As far as I could tell, all the bees were home. At 06.00 the next morning I began the move on my own. It was a simple job I thought, carry the hive 30 metres. To load the hive - bees and all into a builders bag - whole - intact - in one - undisturbed. It was far heavier than I expected. The builders bag should never have been the vehicle of choice. The bees were less than impressed. By the time I'd lowered the bag-clad hive to its destination, the hive had separated and the bees were out protesting.

As I descended the ladder I knew ALL I had to do was extricate the beehive from the builders bag and place it in position on the lower roof. By now I was unrecognisable. Covered in bees, many of them quite and justifiably angry - I resembled a bear - grateful of any protection my beekeepers suit could afford. With the hive on the roof I intended, I decided discretion was the better part of valour and beat a hasty retreat. I stood in perfect isolation waiting patiently for the bees to decide I wasn't a threat. They took some convincing. At the end of the week I tackled the second hive. This time I enlisted the help of fellow beekeeper Matt, an old rugby colleague. Surely he must know how to re site a hive? Clearly not.

Larger than the last hive, I perceived heavier weight and more bees. As before I’d sealed the hive late the evening before. This time I dispersed with the builders bag and instead simply ratchet strapped the hive together. Matt and I carried the hive 40 metres across the roof and then lowered it to its new home. In a scene reminiscent of a moon landing, Hive 2 descend into position.

Elon Musk would have approved. We’ve always used our own honey in our honey beer Stone Brewed. It’s a proper beer with a bit of honey in it. After the lengths I go to to get it, you can see why I use it sparingly.

A few people were harmed in the making of this story. Matt mainly.

Until next time! Cheers,

Click here to try our sublime Stone Brood made with the aforementioned Lymestone honey.